This weekend we took on the biggest piece of furniture I’ve ever built—the Fancy X Farmhouse table from Ana White: 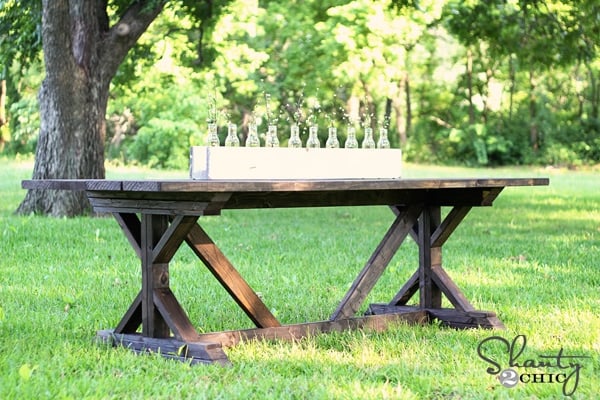 I enlisted the help of my former-furniture-maker-Dad and we were able to knock out the construction in a couple afternoons (probably 5-6 hours total?). If it was just Brad and I, I’m sure it would have taken quite a bit longer.

I followed the plans with a couple modifications to better fit the kitchen. The original table is 96″ long, but I wanted mine to span the length of the island and comfortably seat eight, so it ended up being a whopping 112″ long. I also raised the height by a couple inches to accommodate the slightly taller bench seat.

For the lumber, I considered Lowe’s but was wanted to get the best possible quality of wood (no warped boards) so instead I headed to a local lumber yard and spent a little more on Douglas Fir instead of pine. 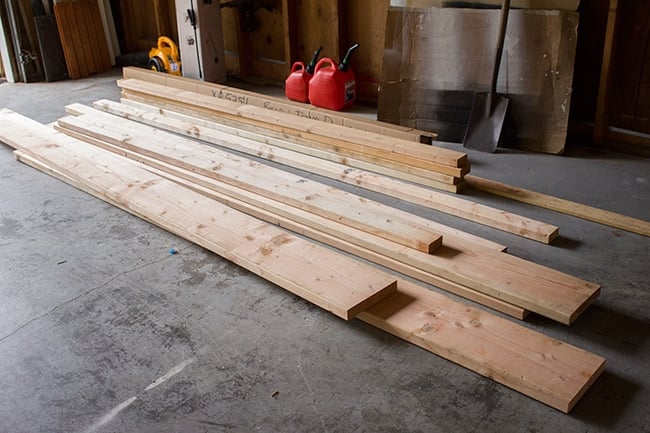 Here’s a tip I didn’t know before: the lumber you see for sale (at Lowe’s and HD too) is “green”, which means it’s not fully dried out yet and has a tendency to warp over time. Apparently this doesn’t matter for framing houses, but not ideal for furniture making. The fully dried options were literally 15x the cost of the green lumber. The local lumber yard said in the future I could place an order 2 months in advance and they’d reserve some wood for me to let it dry out first. Of course I didn’t have time for that this weekend, but they said they thought I’d be fine if I used plenty of screws.

The total cost came to around $120 (I used four 2x10x10″ boards instead of 2x10x8″ boards for the top and grabbed two 2x4x10″s instead of 2x3x8″ for the center supports, plus Douglas Fir instead of pine, making it more expensive than the original $65 plans).

I also picked up a quart of stain and box of 3″ wood deck screws, which brought my overall total to just under $140 for everything.

Once we unloaded the wood, we didn’t waste any time in getting started. We went through the instructions and made all of our cuts using a miter saw: 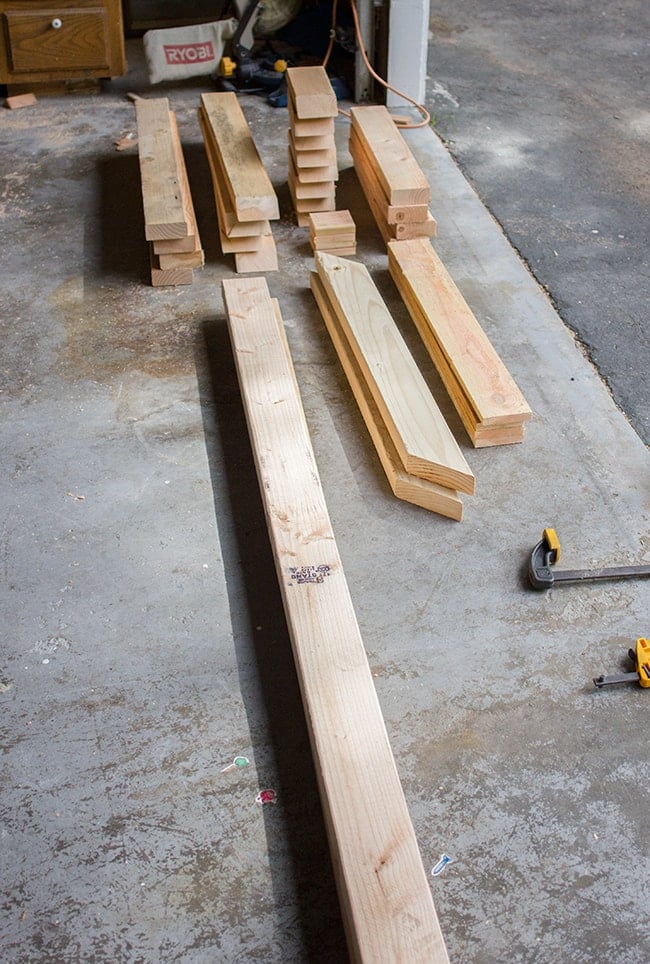 I won’t go into the detailed step by steps here—it’s all laid out in the plans and there are lots of comments on both Ana White, Shanty2Chic, and also the Brag Posts on Ana White’s site, some of which link back to other blog posts. I spent a couple hours reading through as much as I could to make sure I was prepared.

I will do a quick recap though. Here’s one of the first steps that you have to be really careful with—building the table legs: 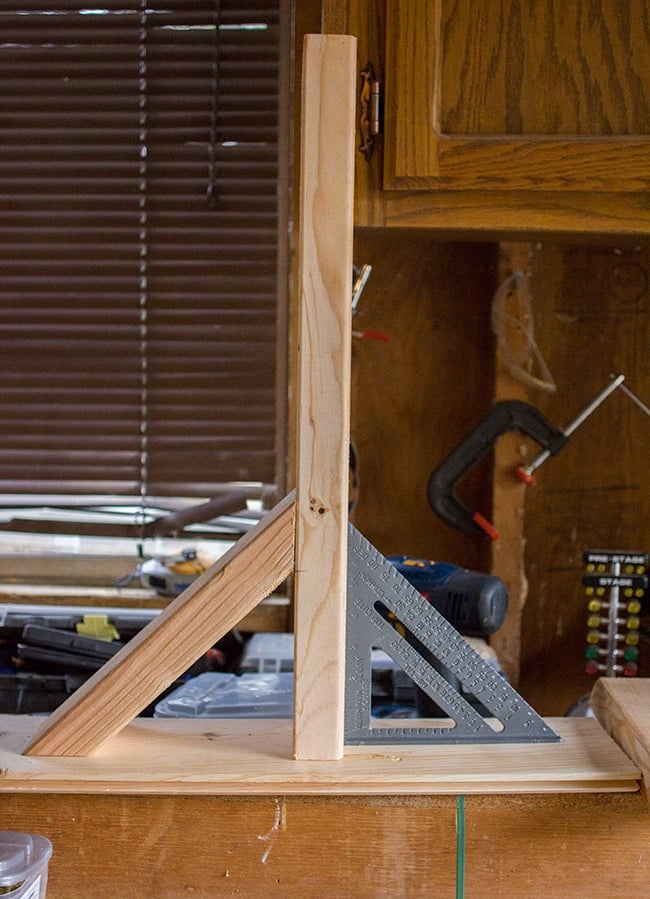 Our measurements didn’t exactly line up with what they had in the plans, but the most important thing was that they were squared and level so there would be no funky gaps. Definitely a two person process. The wood was so soft that we found we didn’t need to pre drill pilot holes a lot of the time and could just countersink the screws.

Here’s the beginnings of the table legs… they look like little headless people excited because they’re about to be holding up a table. 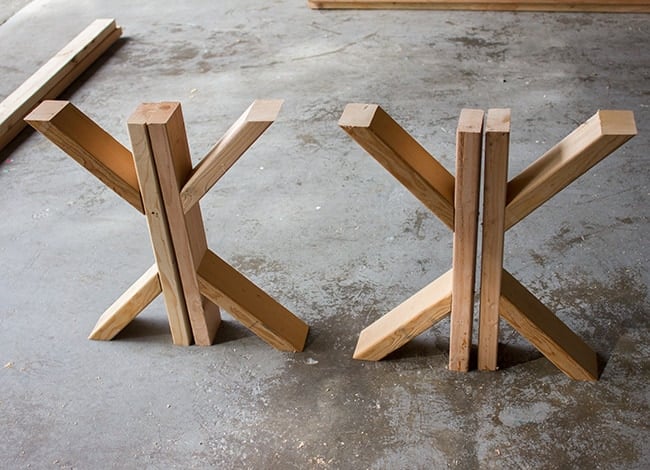 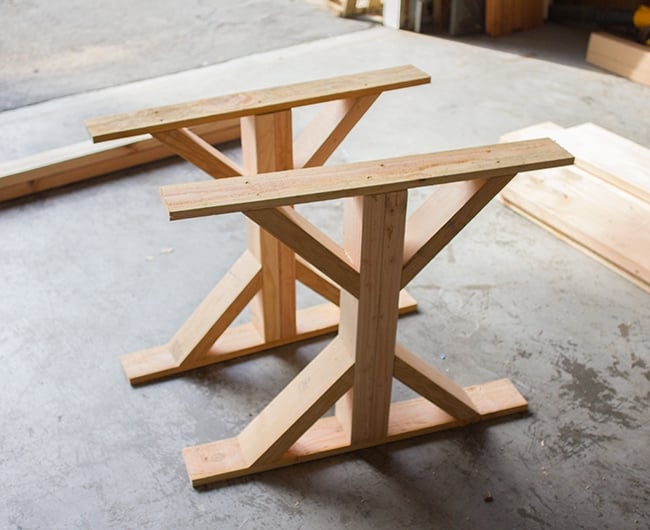 And finally, with two more layers of 2×4’s and little feet: 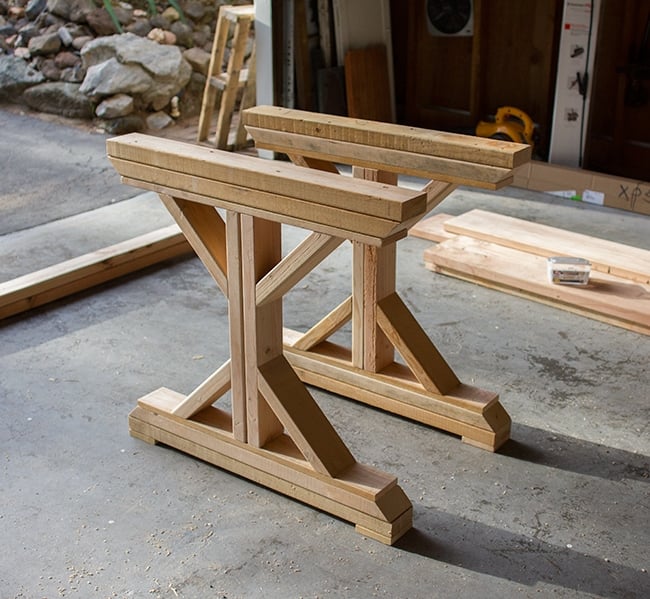 That’s the bulk of the project right there. We completed that in a few hours the first afternoon and then my dad came over Saturday morning to help with the rest.

The next steps were connecting the two legs with two parallel 2×4’s and adding the small cross beams. Brad joined in to help on this one (having three people was actually really helpful here).

I used my Kreg Jig to make pocket holes for this part—two on each board, and we also used a nail gun on the angled parts. And don’t forget the wood glue! 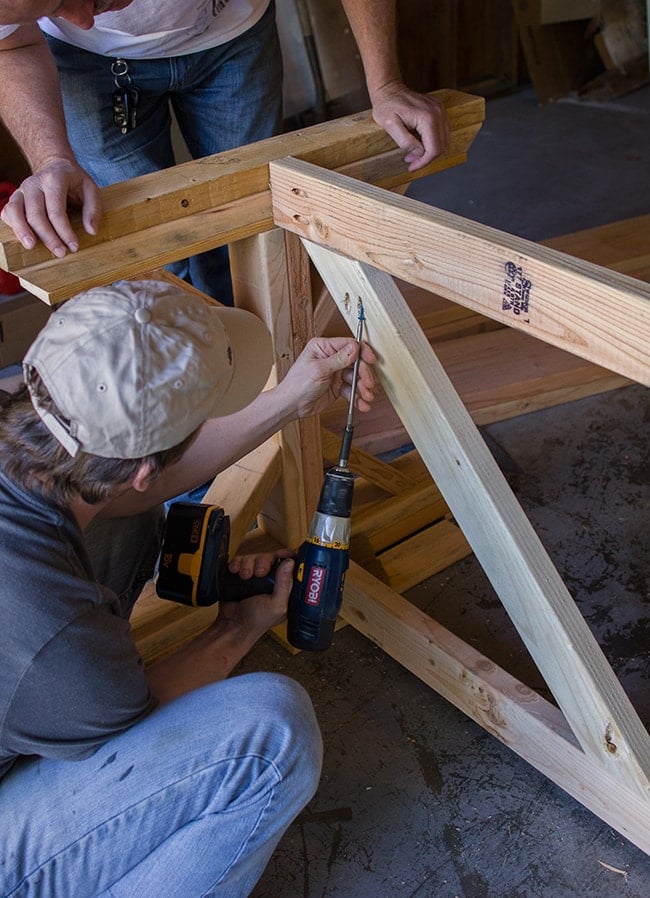 The Kreg Jig came with a handful of these wooden dowel plugs which were nice to fill the pocket holes: 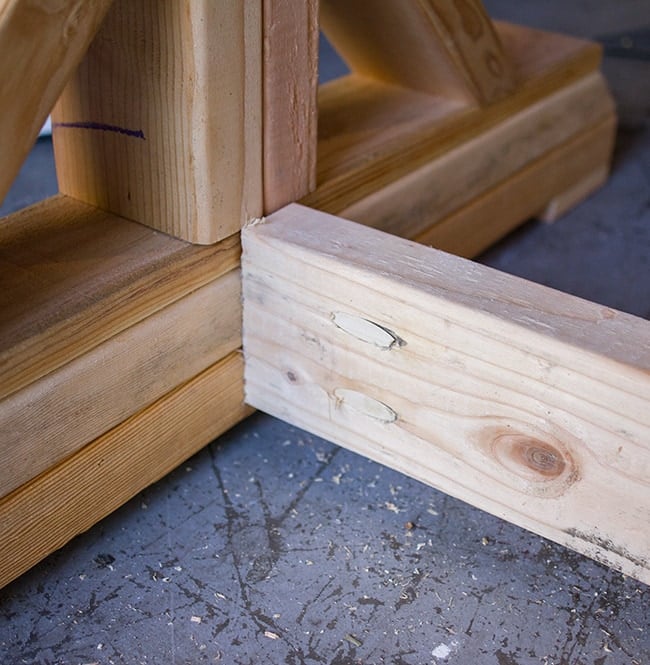 Pretty soon, our base was completely done! We didn’t secure the top boards until the very end—we just set them on top in this photo for a visual: 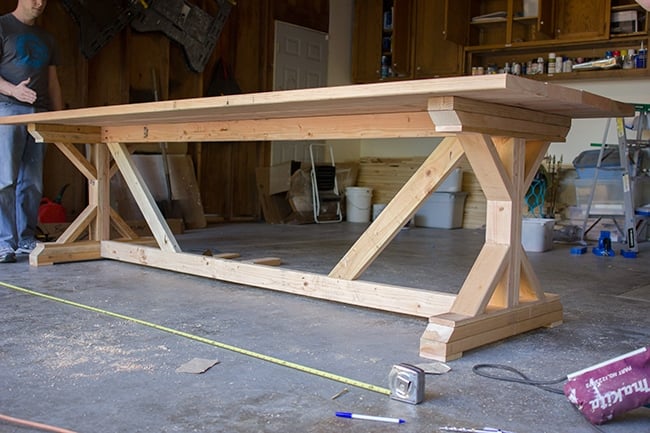 Next we had to trim a bit off of the length of the top boards. To keep them together and level (they weren’t perfectly straight) we strapped them down, measured out 8″ from each side, made a chalk line, and trimmed them off with a circular saw: 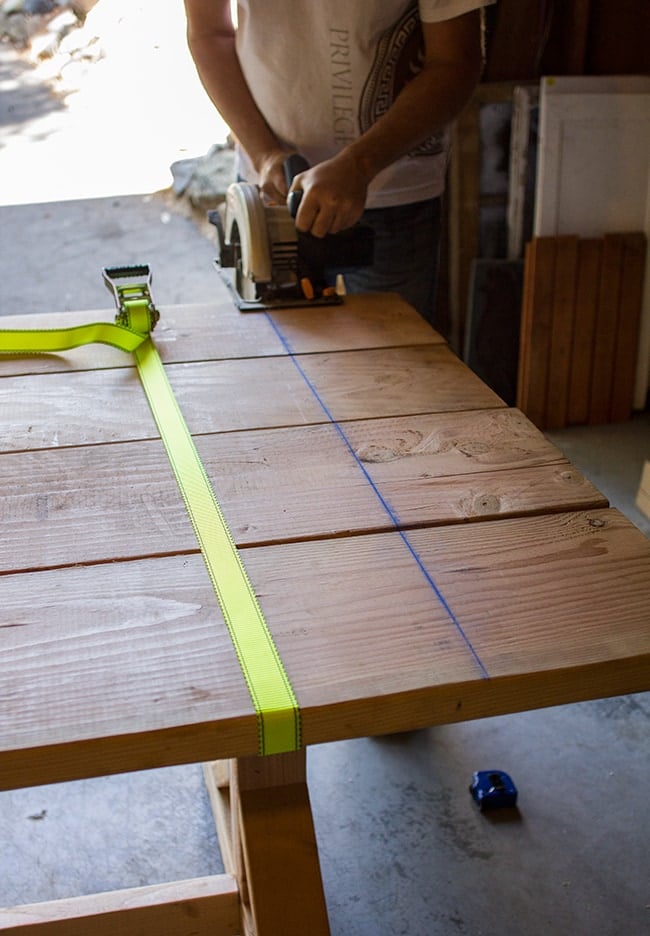 Then it was time for stain. I wanted a warm weathered distressed gray, so I decided to use a mix of three different stains to achieve it: 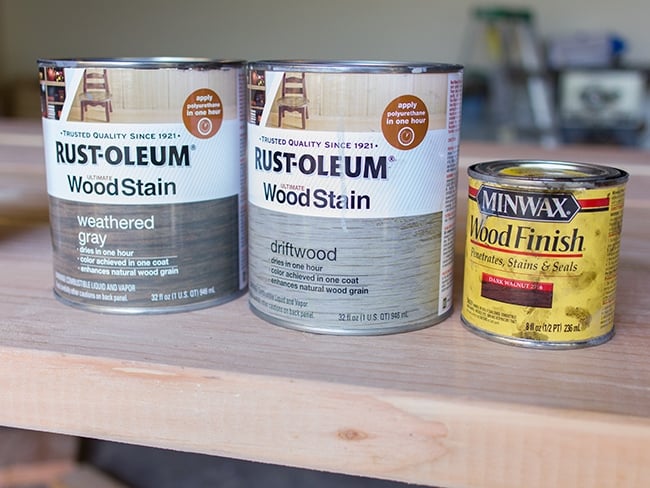 One thing I wish I would have paid more attention to is the selection of wood. This wood has some really reddish/orange pieces, which I am not a fan of, but unfortunately I ended up with several of them. No amount of stain will hide that completely—you’re still going to see that pinkish tone seeping through.

The base wasn’t so bad—most of the boards were a yellow/white tone underneath.

It probably took me longer to stain than it did to build the table. Getting into all of those small spaces and edges is time consuming, and I would constantly stop and sand and restain to get the coloring I wanted.

The top pieces had the most red in them and were the biggest challenge. I found myself mostly using the lighter “driftwood” stain to try and combat the warmer tones. 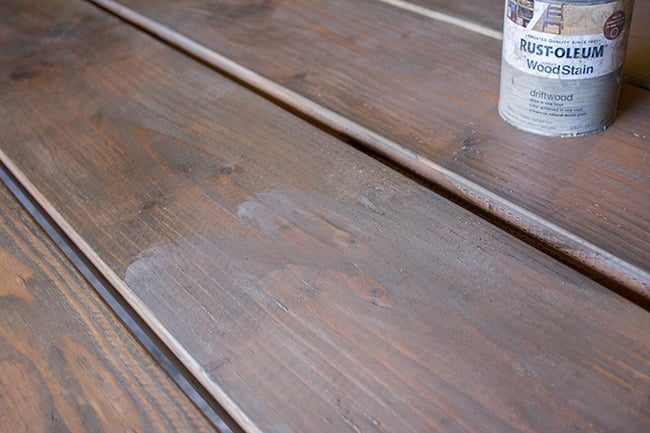 At some point I just had to call it quits and accept that it is what it is. I was hoping once I brought the table inside it would blend with its surroundings better and wouldn’t look so red. 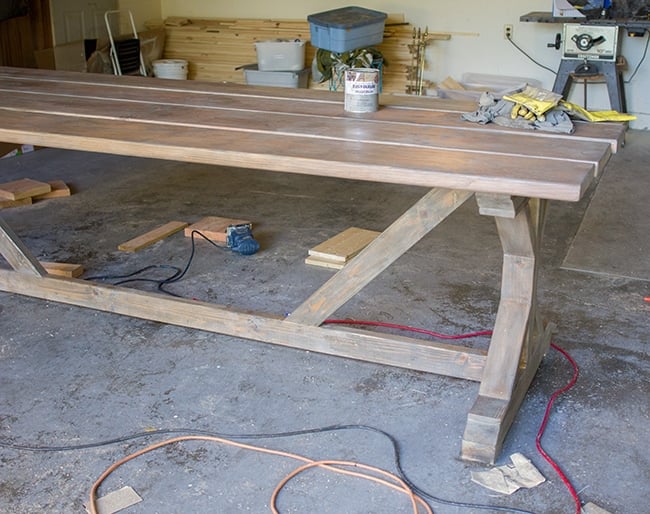 Back inside, I laid out my new jute rug (the same 8×10′ I have in my office and my most favorite rug in the world) 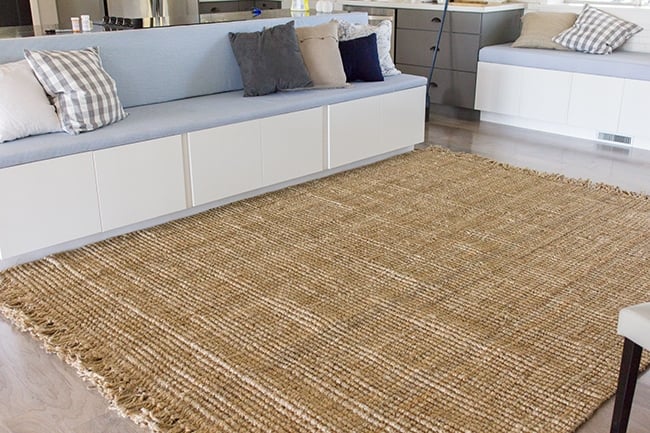 Then we brought the base in… 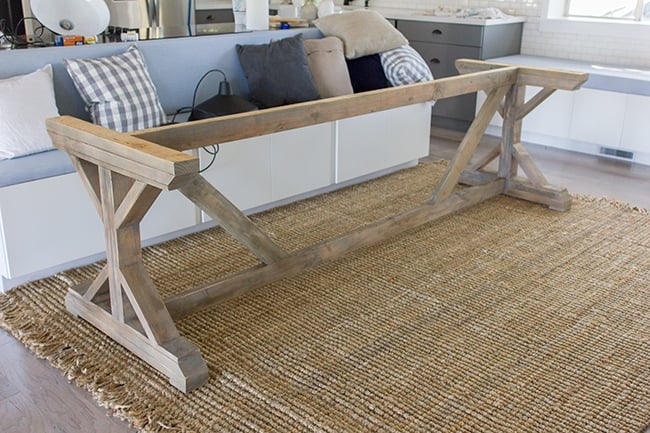 And arranged our boards on top. To attach them to the base, we simply screwed them in from above—two 3′ screws per board. 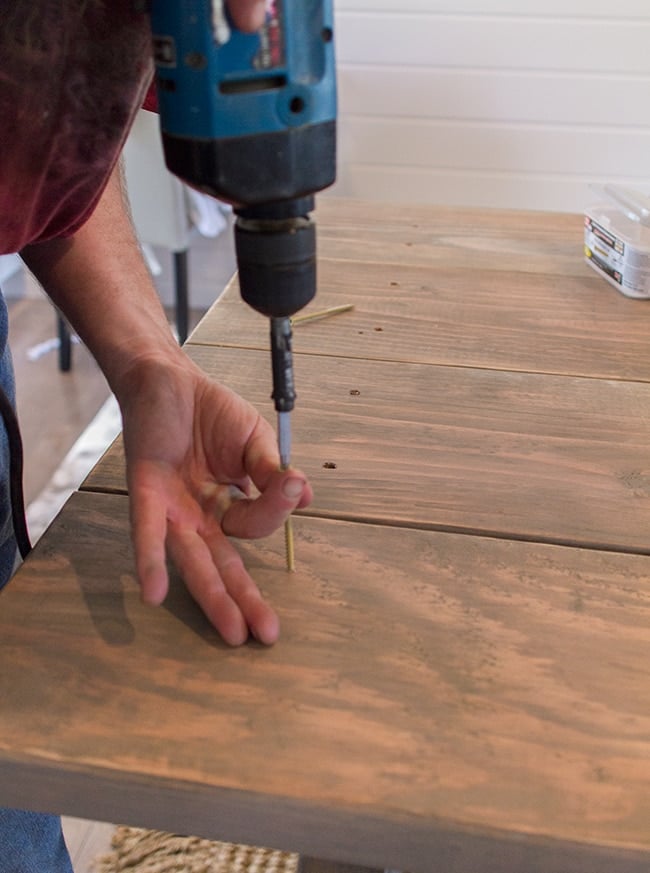 On the opposite side, the boards weren’t completely straight so we strapped them together and drove the screws in to keep them nice and secure (on an outdoor/picnic table you’d want to leave space between the boards for water to seep through, but not indoors). 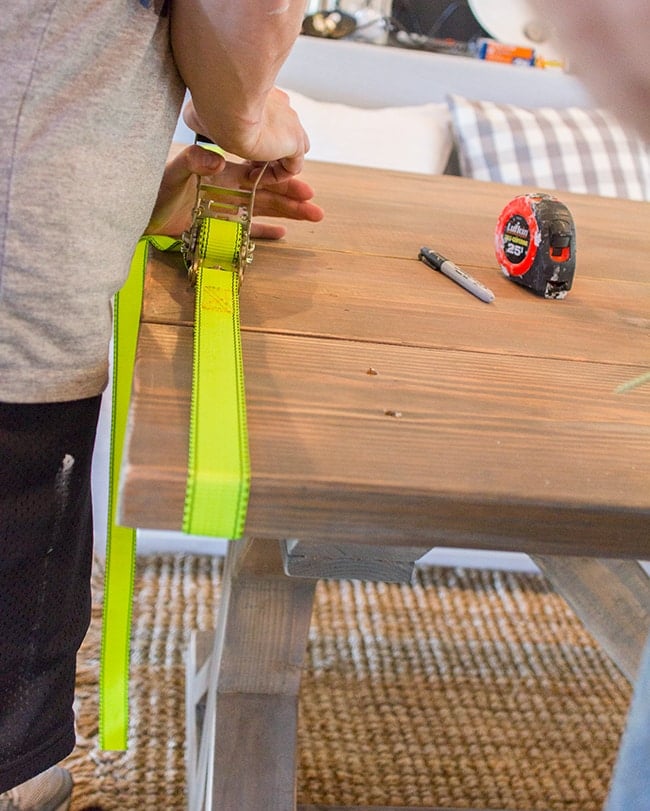 Then I filled the holes with putty. I haven’t had a chance to sand them down and add stain yet but it’s on today’s to-do list (we did this yesterday afternoon). 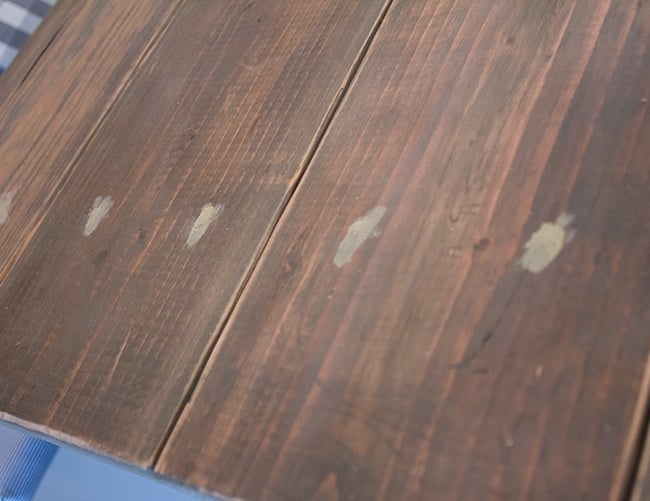 For extra security, we added two boards in the center and attached them with smaller screws from underneath. You can’t see them unless you’re underneath the table. 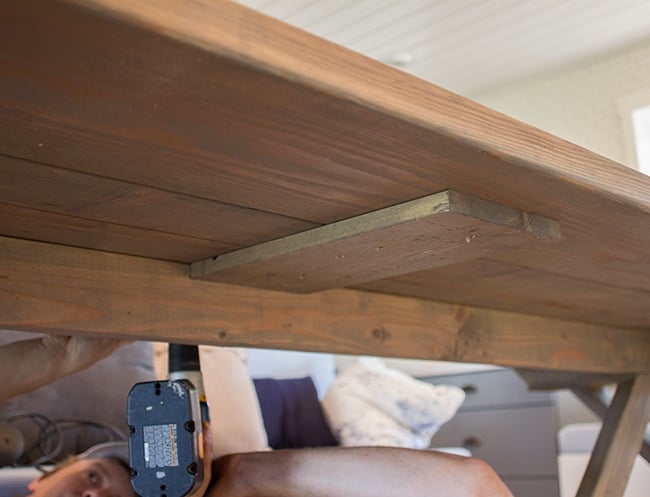 Then we were finally ready to hang our pendant lights! I picked these bad boys up in January for just $40/ea from lightingdirect.com—absolutely in love: 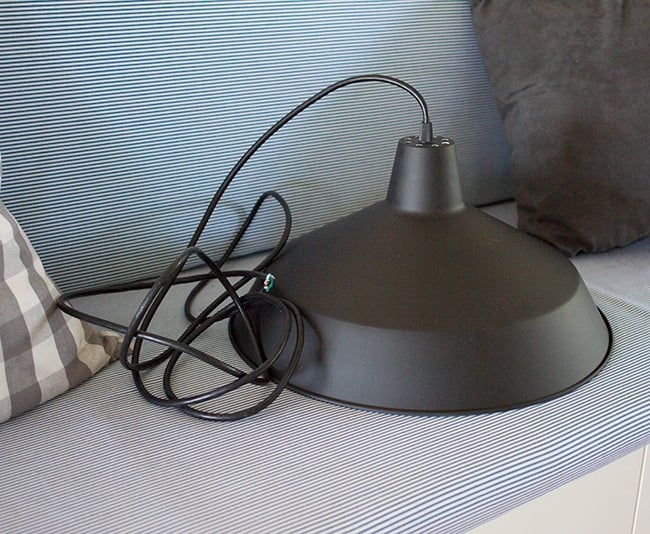 We hung the first one, but there was a problem. The ceiling boxes weren’t exactly in the correct position. 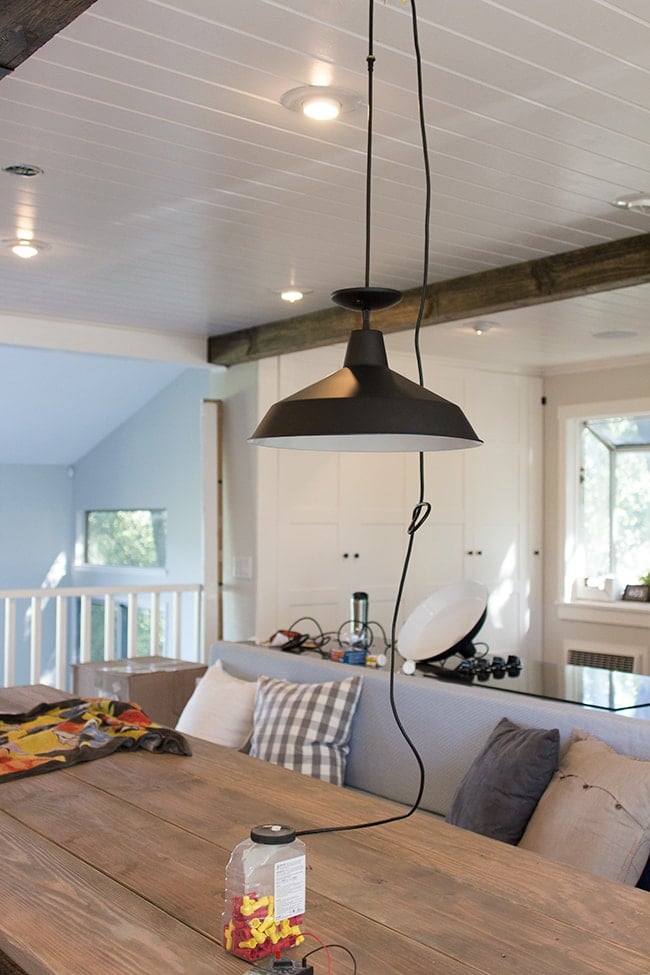 It looks ok from this angle… 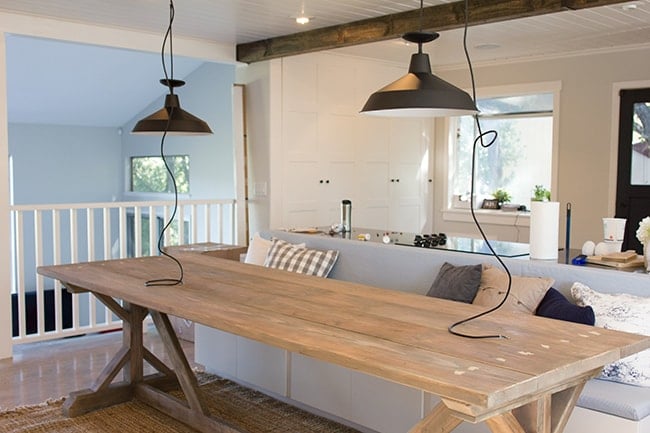 But not so much from here: 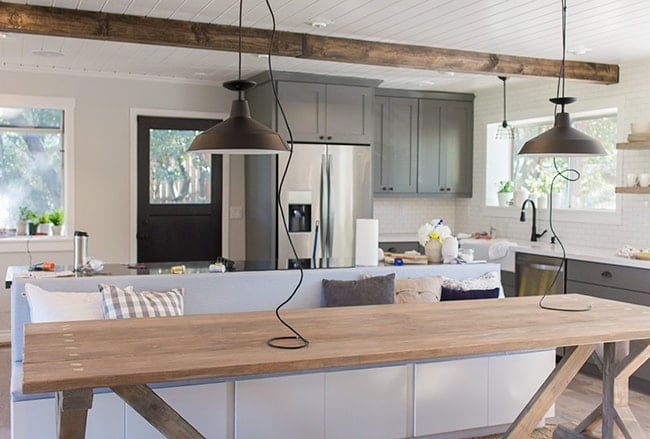 We had to wire the boxes last year, when the room was still an empty shell, so we literally just had to guesstimate exactly where the table would end up. It would have been a miracle if we landed on the correct spot, so I figured this would happen.

Fortunately, we have a solution—ceiling medallions! 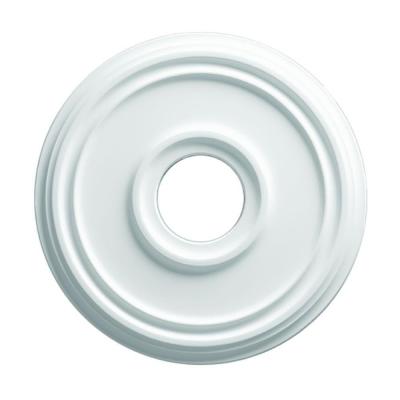 I’m headed to Lowe’s today to see if I can find a couple of these. The plan is to position them over the correct location and have the box and wire hidden underneath to one side. Since our ceiling is wood we can simply screw them in anywhere. Fingers crossed!

In the meantime, I’m loving the way the room has been instantly transformed into a combined open kitchen/dining space… 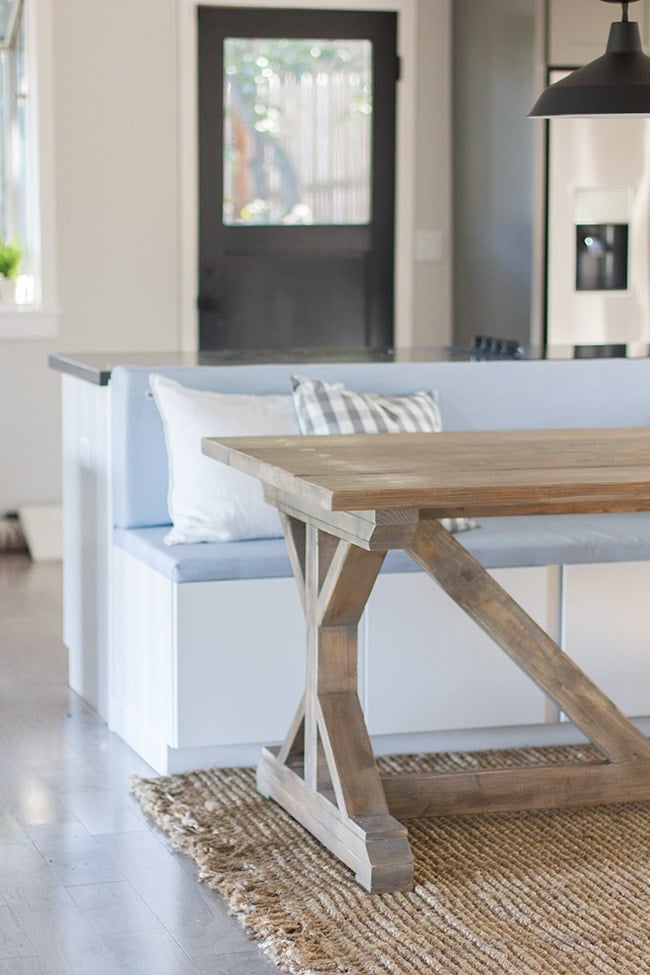 I foresee lots of big dinner parties, holidays and family gatherings here. And this my friends, is the last glimpse you’ll see of the kitchen before the Big Reveal next Thursday (if all goes as planned!) I can’t believe we’re almost at the finish line.

After we finish the pendant lights tonight, I’ll be shifting my attention to the foyer which really needs some extra lovin’. I predict more plank walls in the near future. Check back in a few days to see what I’ve been up to—or follow my progress along the way on instagram where I’m always posting projects in real-time 🙂