Home » Modern Farmhouse » Kitchen Chronicles: Building a Window Bench Seat
If you’ve been following along on instagram, you already know what we were up to this week… 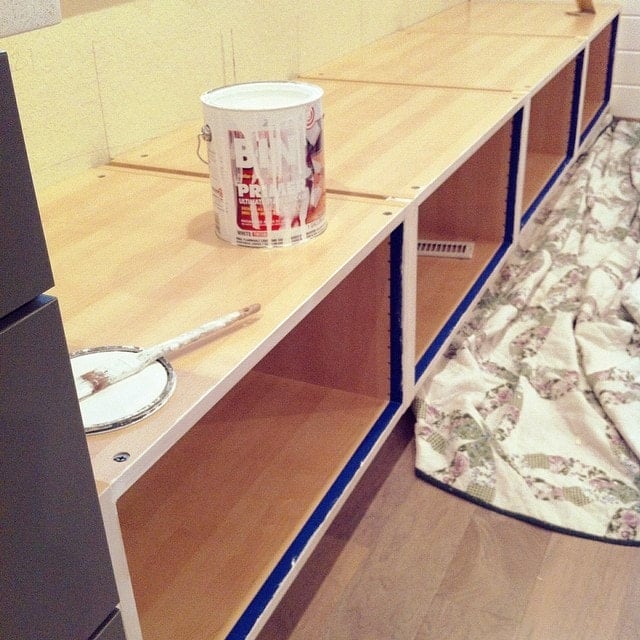 We started with this empty space under the dining area window, which I thought would be perfect for a nice cozy bench… 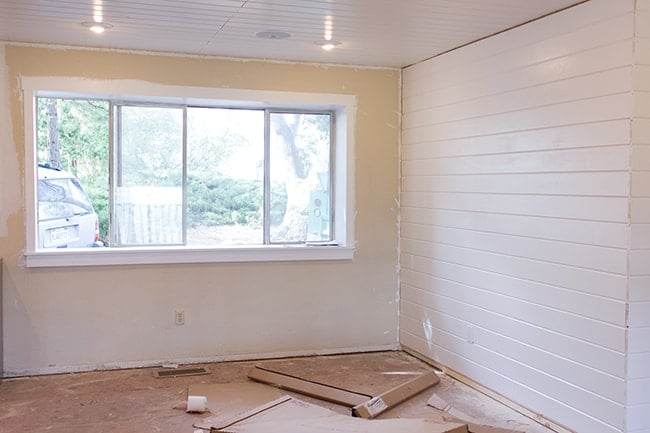 To make it serve a dual purpose by adding storage, I decided to go with these Akurum refrigerator cabinets: 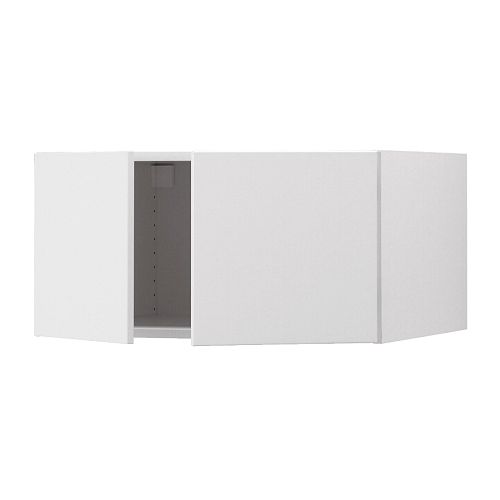 Because they are standard cabinet depth (24″), they would also line up with our existing cabinets on the left to look like one long built-in wall.

I chose the same Applad white doors to match our new bar cabinets and keep them nice and clean looking without distracting from the rest of the room (and yes, I forgot to select “white” instead of “birch effect” for these cabinet boxes too, argh!)

But first, we had to build the base. It was basically the same process we used to build our bar cabinets, except there was one small issue… 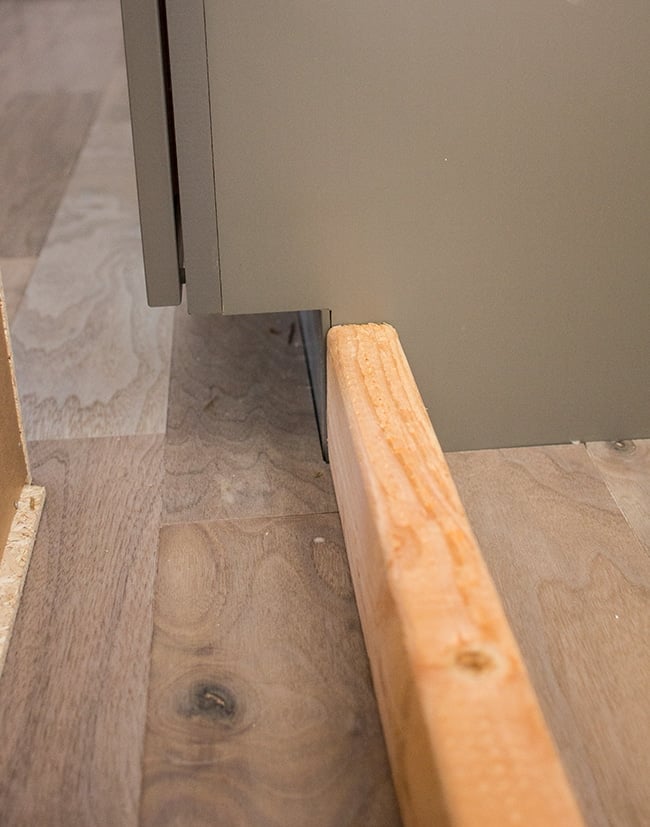 The 2×4’s weren’t tall enough to match up with the existing cabinet. Standard toe kick height is 4″, but 2×4 boards are just barely over 3.5″. With the bar it didn’t matter because it didn’t have to line up with another cabinet, but we had to elevate these 2×4’s somehow…

So we ripped down some boards to make shims. 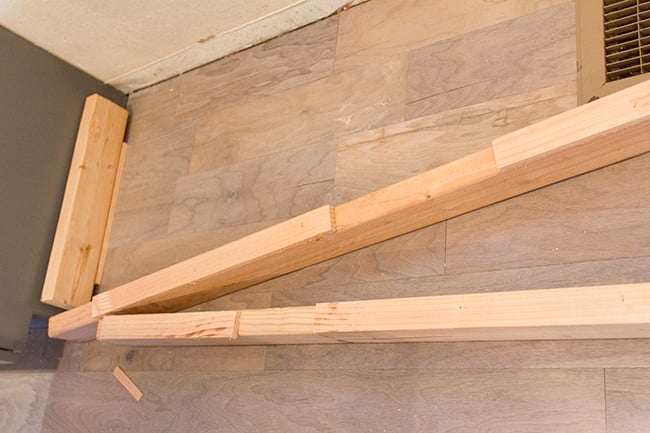 Then we assembled the base upside down so we could screw the front 2×4 into the cross pieces first. We decided to place a cross piece wherever two cabinets would meet up for extra support. 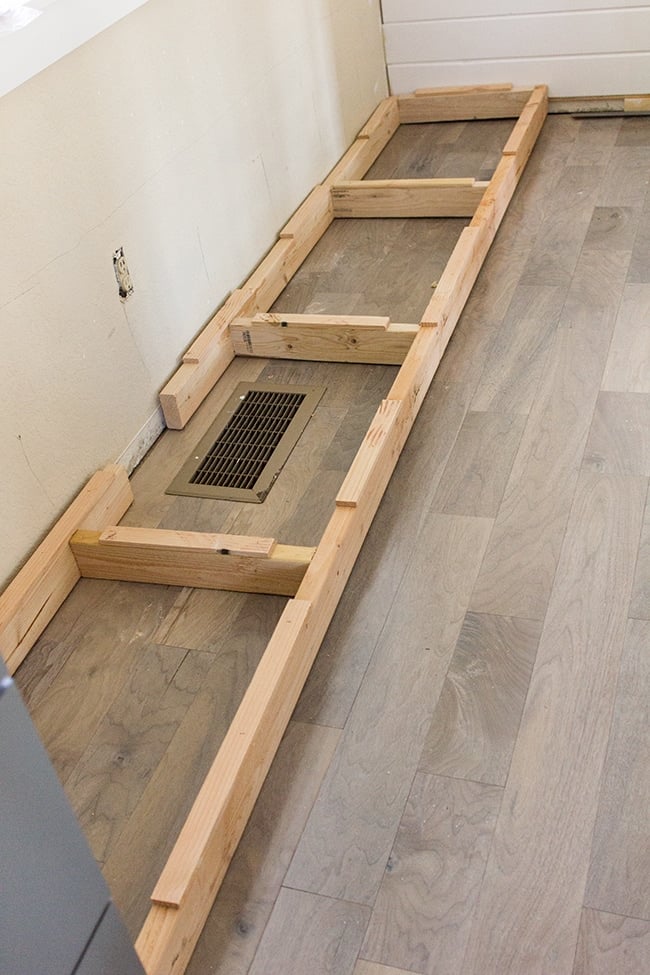 You’ll also notice a chunk of board missing out of the back. Since we were covering over a vent, we needed a way to reroute the airflow. I picked up this narrow grille at Lowe’s (designed for toe kicks) and gave it a few coats of white spray paint: 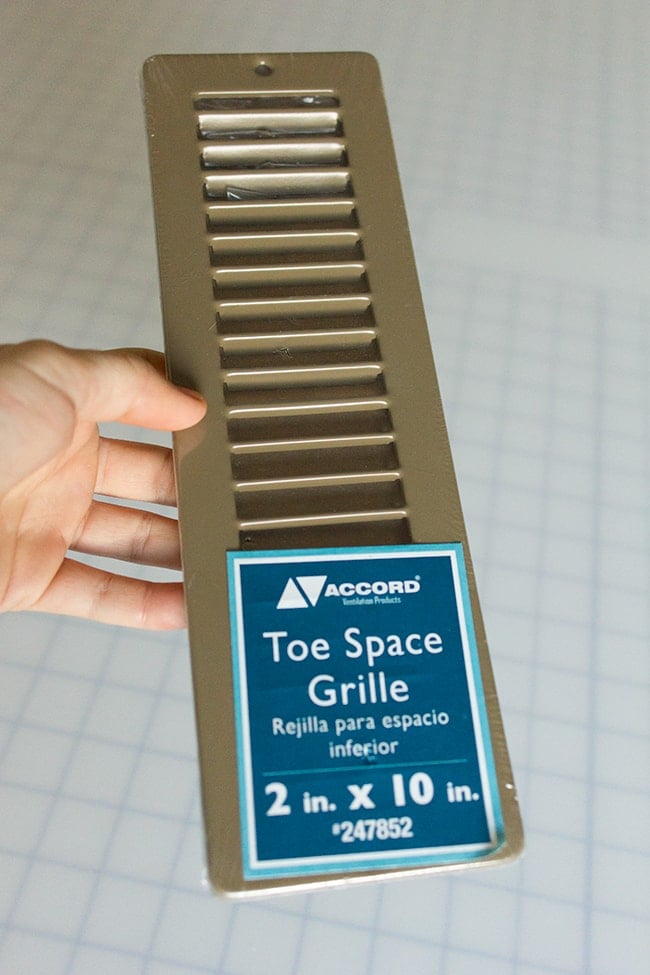 After the first 2×4 was secured to the cross pieces, we flipped everything over to its final position and attached the front 2×4 so it was all one piece: 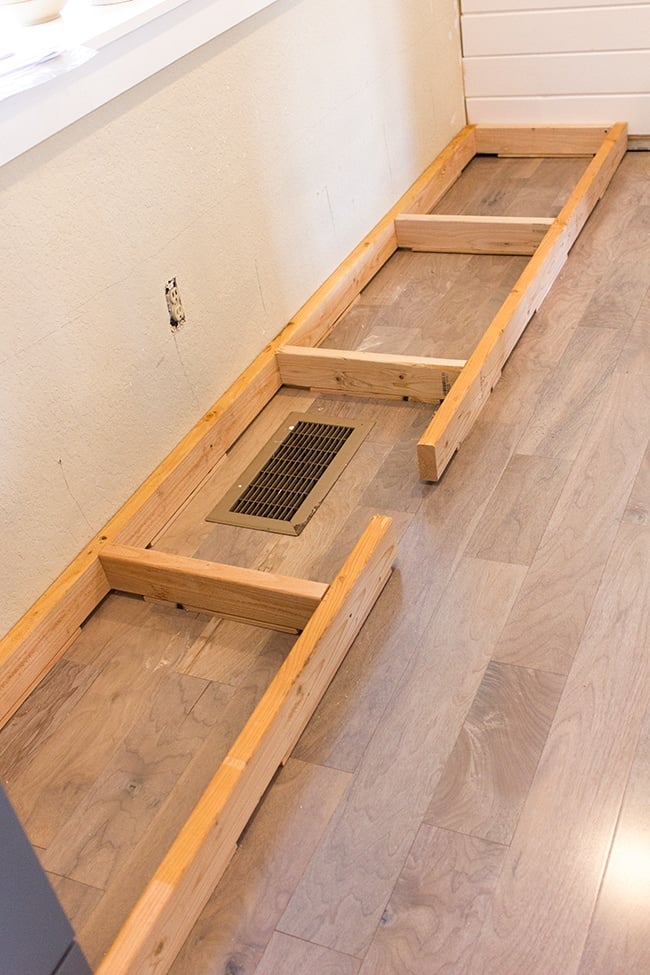 Then we secured the back 2×4 into the studs so it wouldn’t go anywhere.

To seal off the vent chamber so air wouldn’t leak out, we placed some trim pieces along the bottom and caulked it in really well. We also had to cut a hole in the back for the outlet: 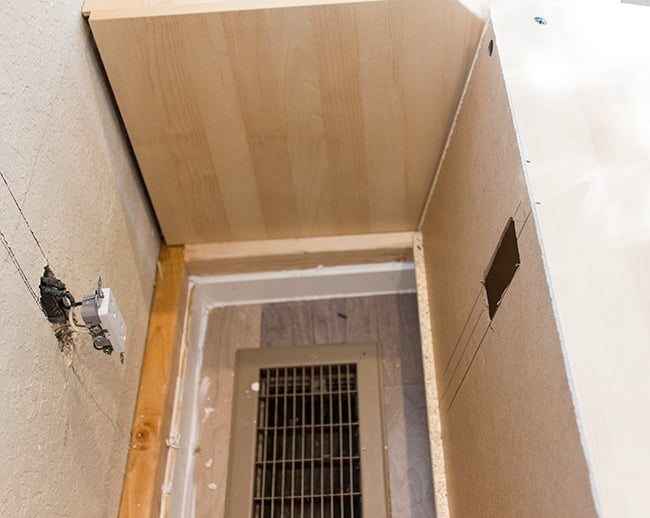 Then it was time to get the cabinets in! 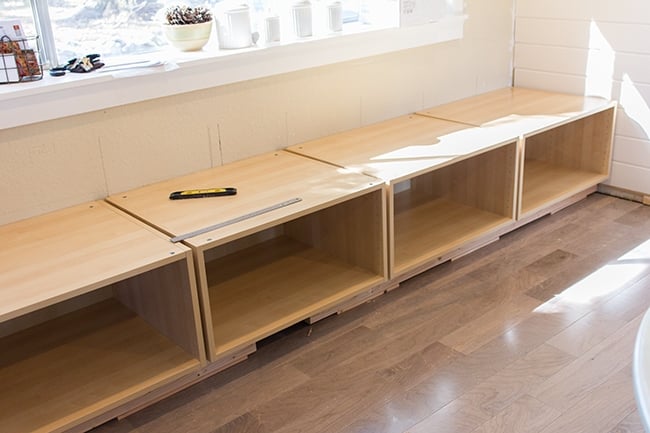 I had 3″ of extra space to work with, so I decided to divide it evenly between them (including the far left and right sides) which meant I had to make 0.6″ spacers. I used some scrap pieces of wood we had in the garage and ripped them down to size, then cut them to the height of the cabinet (15.25″): 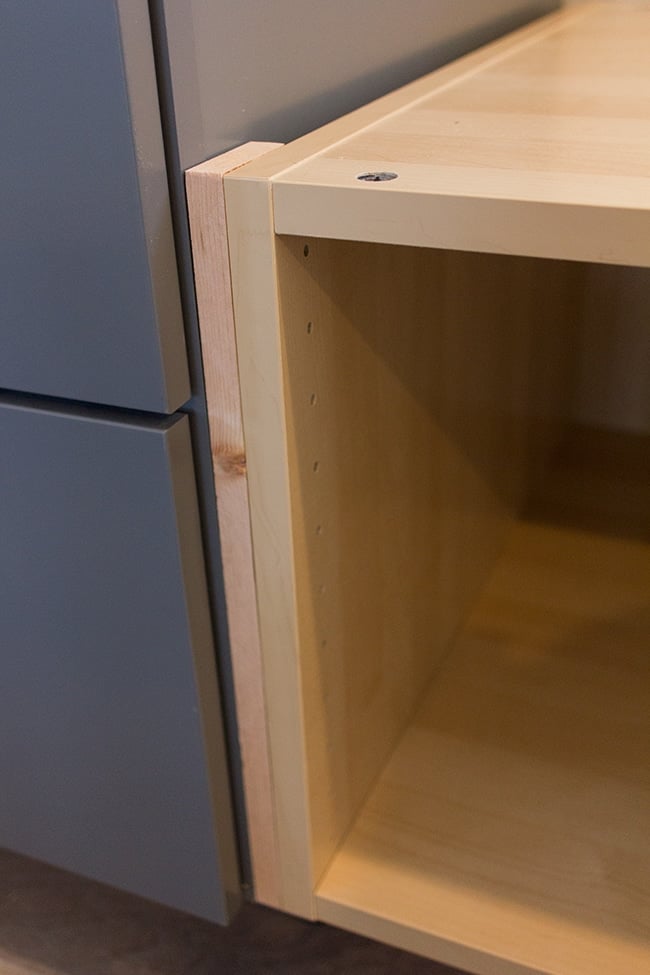 Once they were in, we screwed through the sides of the cabinets (both left and right) and caulked them in: 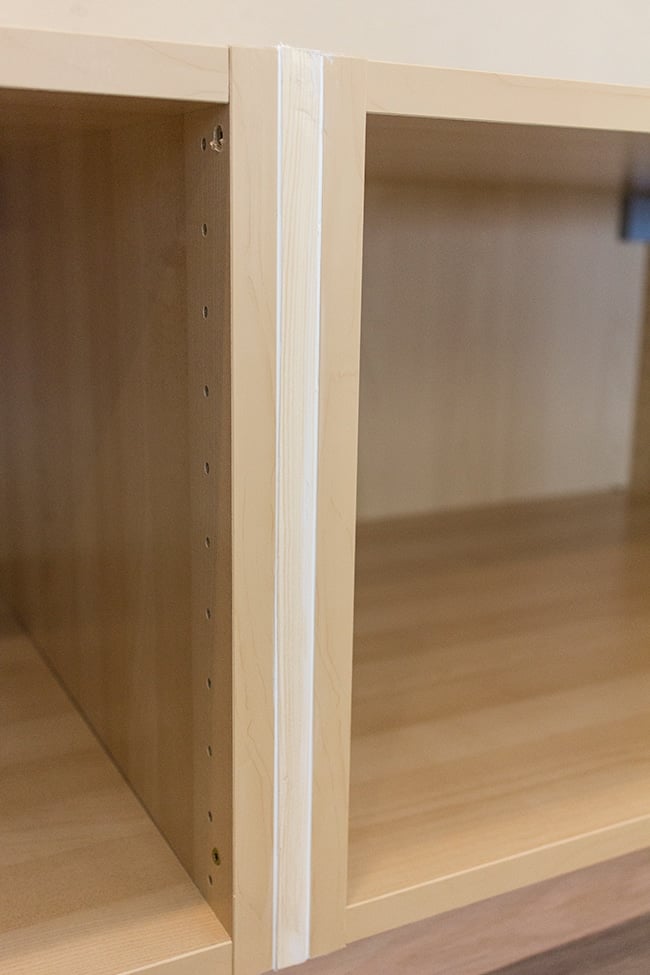 Then we put a few screws through the cabinets to attach it to the 2×4″ against the back wall. This bench was solid.

The toe kick piece we bought fit like a glove, no ripping down needed! 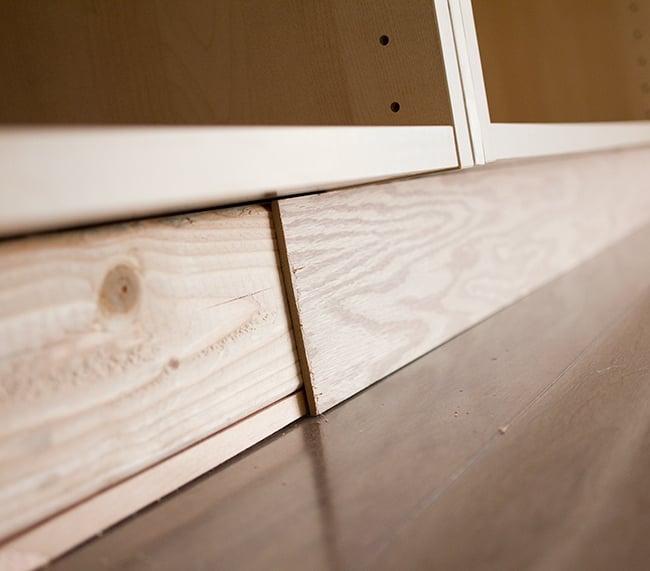 The vent grille was a little shorter than the toe kick, so we slid a small piece in at the top so there wasn’t a hole (It doesn’t look very pretty, but it won’t be seen): 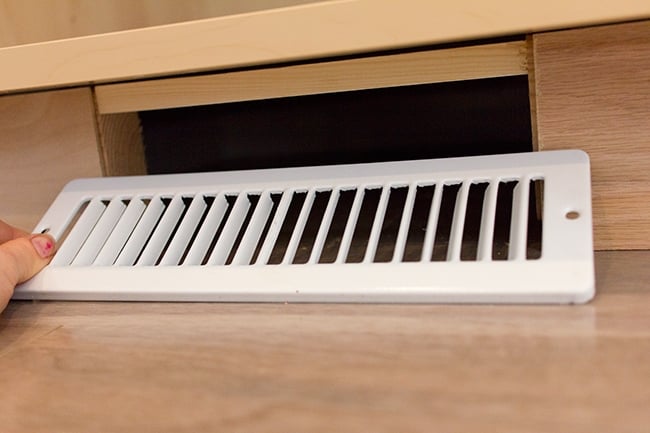 Once everything was in, it was time to prep and paint!

For the cabinets I used the same Zinsser shellac based primer (red can) that I used for the pantry and bar cabinets: 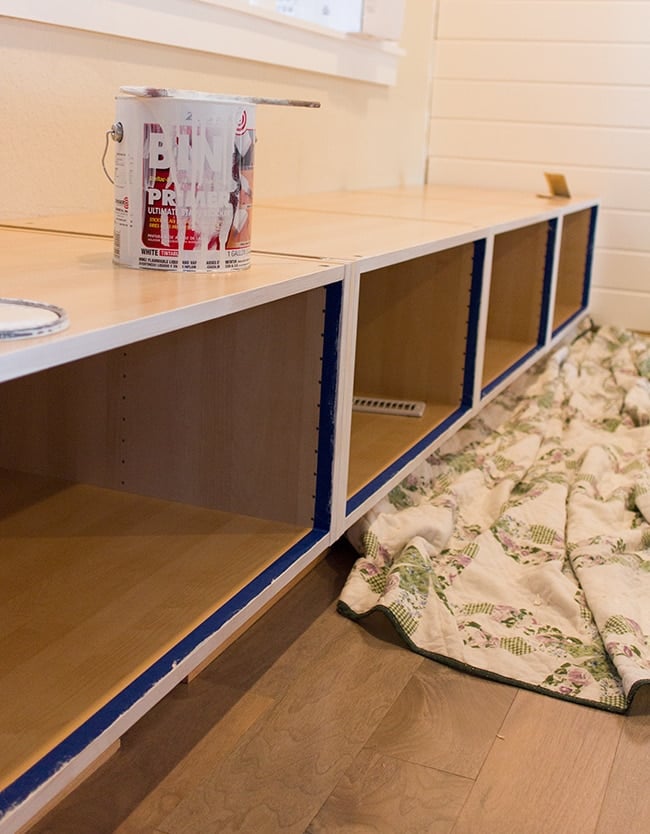 The only part that would be visible from the outside was the face frame, and I wanted a nice clean edge on the inside so I taped it off.

While working on that, I painted the toe kick and the rest of the trim that we’ve been dying to put in (tip: ALWAYS paint your toe kick/baseboard/crown molding before installing so you don’t have to tape it off later!) 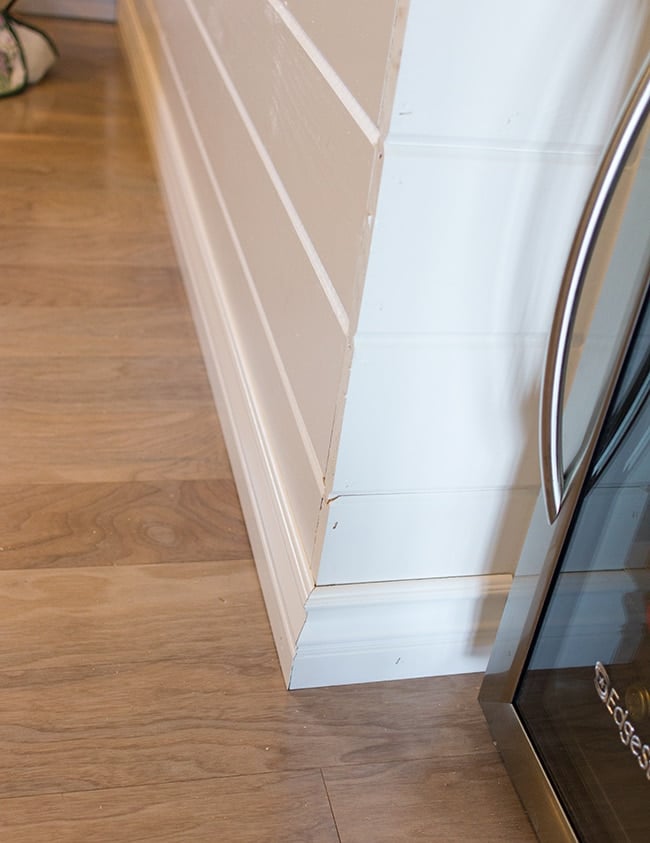 We used a 90° corner piece over the planks and quarter round where the plank wall met the ceiling: 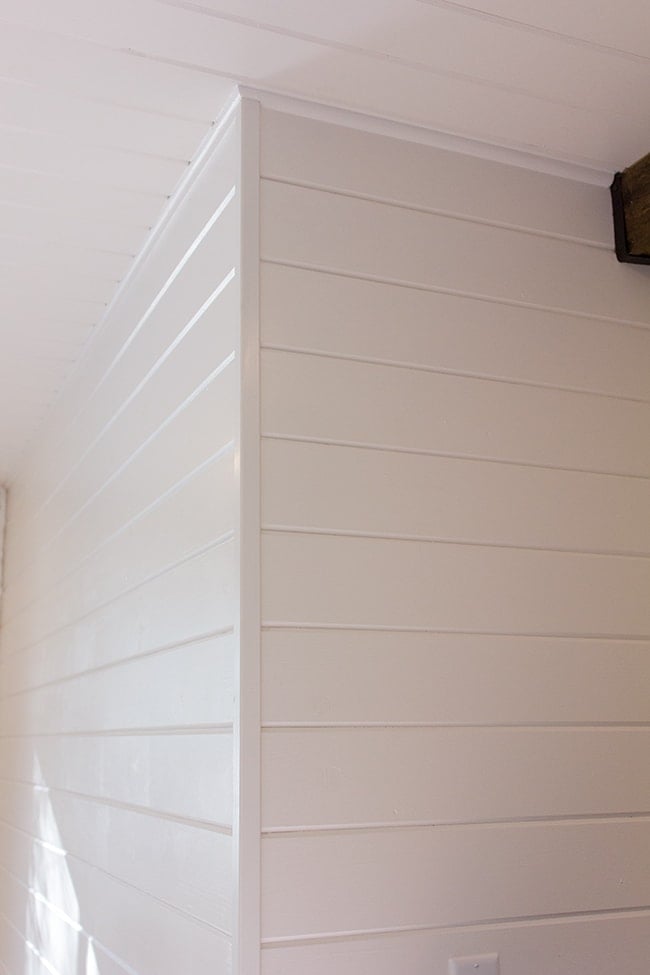 Ahhh… so much better.

The toe kick worked out nicely too: 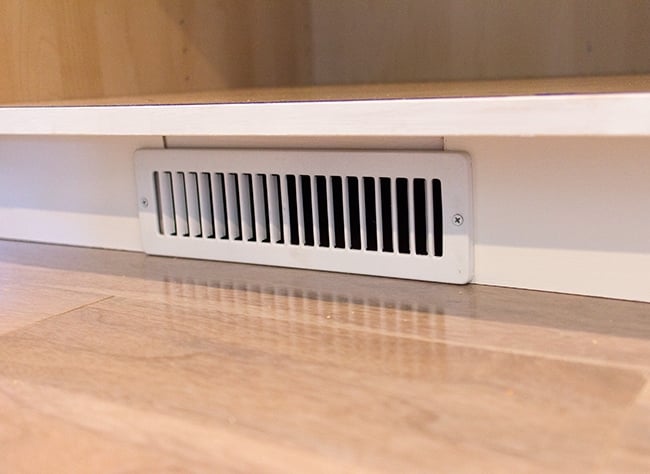 All that’s left was the doors… 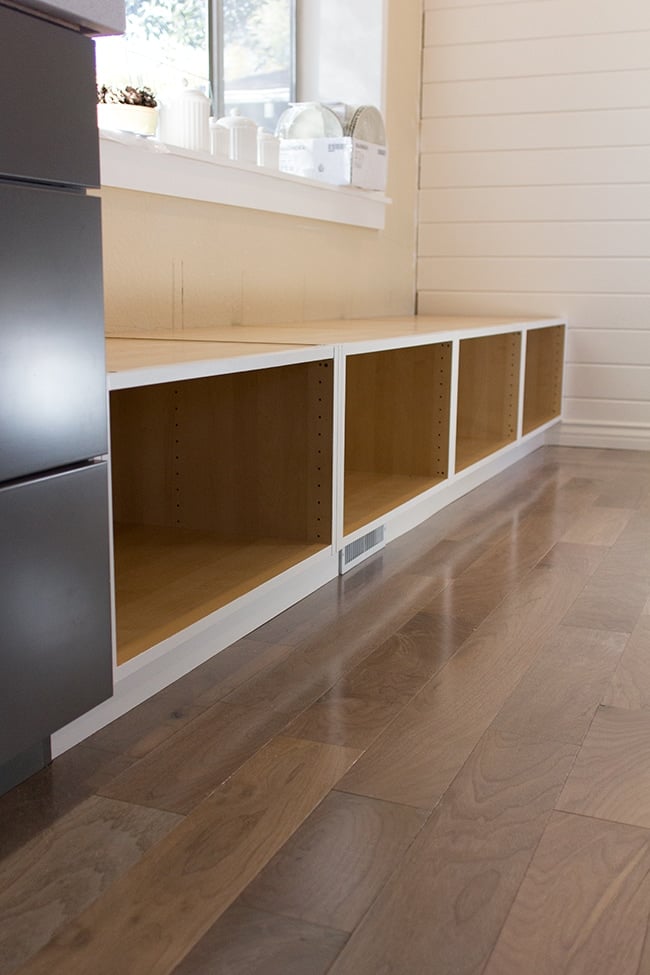 We finished the first three cabinets and realized we had a problem. 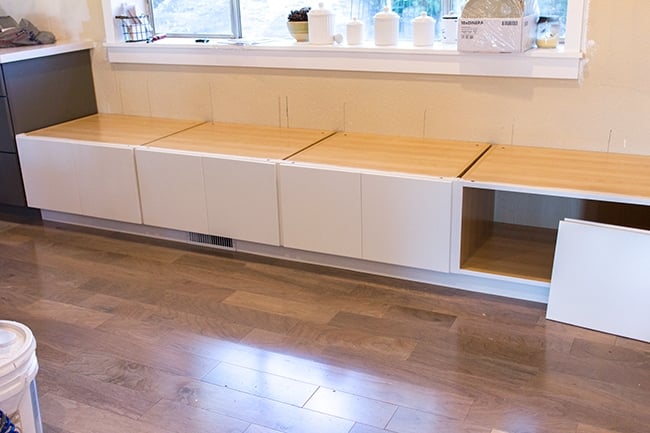 Apparently, someone in this house *coughBradcough* must have accidentally thrown away a box with half of our hinges in it. After a frantic search came up with nothing, I had to buy 8 more packages (16 hinges total, we still need to build another bench seat) for $60 from Ikea.com. I was just relieved we were even able to order them online and get them shipped. They won’t be here for a week, so sadly this project will take a little longer to finish… 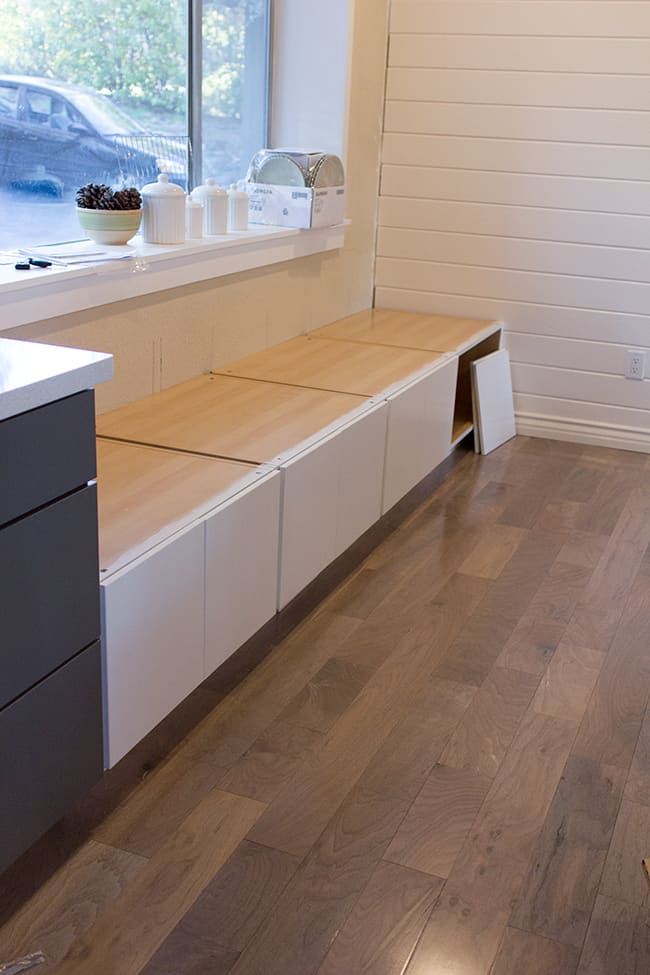 In addition to that setback, I can’t decide how I feel about the gaps in between the cabinets. I didn’t even really think about it when I was lining the spacers up with the cabinet base instead of the doors. Might have to move them forward.

What do you think? 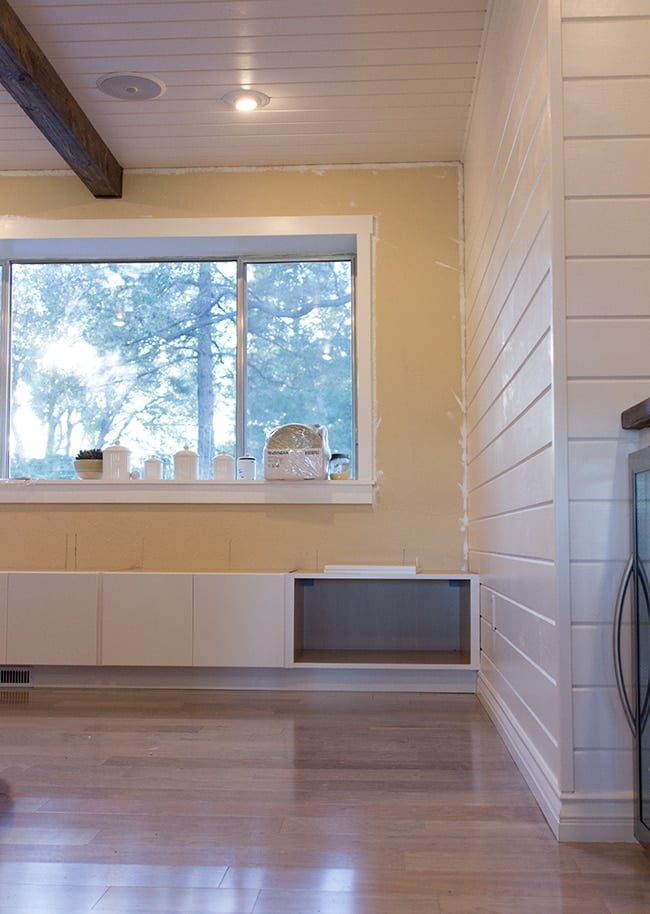 As for adding hardware or not, I’m undecided. I’m leaning towards keeping it really simple, so it looks more just like one long panel instead of drawing attention to the fact that it’s cabinets by adding knobs. That was the original plan at least—we’ll see how it looks after we get the last doors on. And I ordered the foam so hopefully next week I can get started on the cushions.

One more update—we bought our backsplash!

After much debate (which I’ll cover in a future post) we went with this white subway tile from Lowe’s: 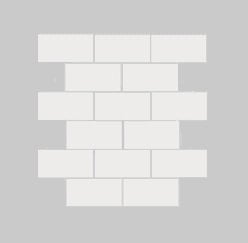 Pin
It’s a smaller version of standard 3×6″ tiles on a mesh backing. After getting a couple outrageous quotes for labor to install them, we may or may not have officially lost our minds because we’re going to tackle this ourselves. This weekend. Fellow DIY’ers, we need your help. Any suggestions/tips/advice you can give us, please, we’re all ears!
If there’s no update from me by Tuesday—send help because we’ve probably fallen into the black hole of tile.